I can help you out!

Got to love these ads: 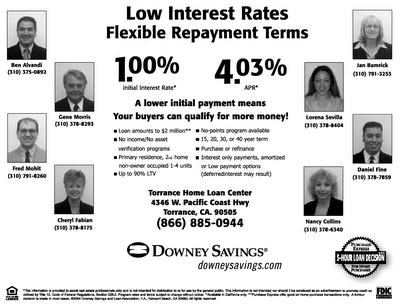 Posted by Jason Huy Lam at 6:50 PM No comments:

Time to shop till you drop

A lot has happened since the last post in which a MS analyst claim that the bear market has ended. Yes indeed it is just beginning. Let's summarized some points
So what is next, gov is reacting but not being proactive in solving problem. Buy toxic security "seem" to be such a great idea and now it is totally abandon because the economy's health has deteriorate significantly. Fundamentally, it is as bad as a month ago, only worst because of what the gov did. So, what do I see in the horizon:
Are the gov addressing any of those problems right now. In fact, they are making them worst for when it might occur. Tons of US bonds are being sold and money being printed. Again, they are only reacting and chasing after a problem. Paulson definitely earned his PHD (Permanent Head Damaged)
Posted by Jason Huy Lam at 8:42 PM No comments:

Analysts at the US investment bank Morgan Stanley are recommending that clients start to buy shares again after more than a year of falling markets. In an investment strategy report, analysts at the bank said that all four indicators they use to gauge the equity market outlook have started to indicate a turn in the downward trend.

"We have now come full circle: our market timing indicators are giving us a full house buy signal," said the statement. "Each of the four indicators – valuation, capitulation, risk, fundamentals – tells us to buy."

Unfortunately the model tends to NOT work this time.

Posted by Jason Huy Lam at 6:22 PM No comments: