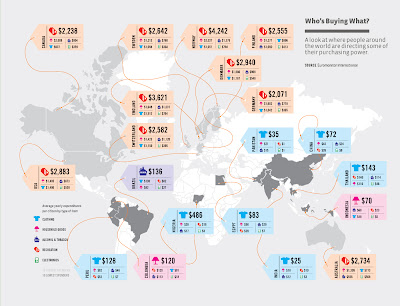 Now -- The spenders are unemployed.
The savers are ripped off.
Posted by Jason Huy Lam at 9:33 PM No comments:

China is facing an impeding problem that never any nation had faced before. It will be in a massive scale unheard of and uncontrollable. The Chinese Ministry of Labor has warned multiple times regarding this wave incoming tsunami.

The economic meltdown in China will unfold precisely opposite than the Western half counter part. "The threat comes not from the commanding heights of the economy, but from the grassroots. All along the coast, thousands of small factories that rely entirely on US and European export markets are cutting back production or shutting down. Their margins were thin to begin with, and now their orders are being slashed. The first to be affected aren't the global professionals that populate China's big cities, but the migrant workers that made those factories hum."

"Last week, Chinese officials admitted that at least 20 million migrant workers - one out of every six - who journeyed back to their hometowns this lunar new year won't have a job to return to. Compare that to roughly three-and-half million American job losses so far. For the moment, China's army of unemployed seems disheartened rather than angry. Many of them took extended holidays among family back home and only now, out of desperation, are resuming their job hunts in earnest. No one knows how long their patience will last, or how much larger their ranks will grow in coming months."

You can imagine what could 20 million unemployed, hopeless workers do. Especially with a large portion of them are single MALE who have no hope of establishing a family. With a high ratio of male to female due to the infamous "One child policy". Out to the street they would go, form gangs, riot and much more!
Posted by Jason Huy Lam at 9:03 PM No comments:

The following chart is copied from Jesse's Cafe with a little modification footnoted below. 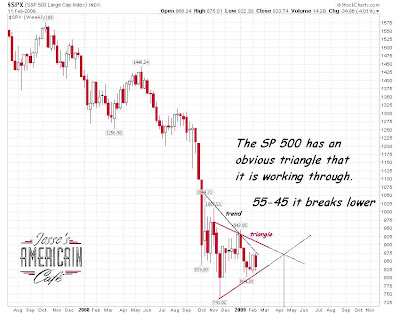 As you can see! Right around mid April ~~~ April 16th. The triangle will complete. Expecting a continuation pattern of down trend.
Posted by Jason Huy Lam at 10:21 PM No comments: