The disparity of covid

During the time of prosperity, the elite accumulated more wealth, gained more power, controlled more institutions. During the time of crisis, it is the commoners that scarify the most, loosing their livelihood and even their life to get society out of the crisis.

None as more obvious as right now during this Covid-19 crisis. The uneven distribution of burden has put all the weights on the blue collar and healthcare workers. During the boom of the decade prior, blue collar workers wealth shrink as a percentage of global wealth. Wages fall fair behind cost of living. Particularly real estate boom has caused unreasonably high prices with a mass transfer of wealth to the elite.

Then comes Covid-19, it is now the blue collar workers are considered as the essential worker, the workhorse to keep society on surviving mode. They continue having to risk their life to be exposed to the virus. The healthcare workers are praised as hero without cape but they are facing with serve shortage of PPE, the basic armor and ammo of the battlefield. It is more like hero with out PPE. While the rest of the society either work from home or collect unemployment check.

With the current federal government assistance, the unemployment check could be as high as $950 a week. That comes out to be over $60K/year salary before tax, or $28.5/hr rate. In a way blatantly unfair for those who are risking their life in the front line. Those delivery person, those grocery workers, they are getting roughly minimum wages, not where close to $28.5/hr rate. The healthcare workers surely are better off. But this benefits has unfairly extend to some group of people rather than reward those who are scarifying. Those who are in the front line not getting any more but health risk and empty praises. Even promise for a big worthless parade. Give them PPE, give them at least $28.5/hr above their normal rate, give them a true sense that society is behind to support them.
Posted by Jason Huy Lam at 10:25 PM No comments:

Map for social distancing score board has an interesting correlation to US election map. Particular when zoom into each state. https://www.unacast.com/covid19/social-distancing-scoreboard 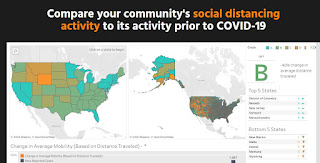 Every year there is a season wild fire, then come the Australian bush-fire that burned almost half the continent. If it wasn't separated by mass of water, the whole world would probably have burned down.

Every year there is a season of influenza that spreads across our population. Then come this year, the COVID-19, one in a hundred year kind of virus that have the potency to wipe out 20% of the population.

Looking at these two phenomenons have of many common patterns and characteristics. From the conditions that facilitate the spreads, to the responses, the outcomes and the affect of such disasters on its subject.

Given the ripped condition of high heat, drought, over logging, irrigation and human impact, forest are less resistant to fire. Fire are more frequent and severe. California has the worst fire season in the recent years. Then come the Australian bushfire that engulfed over 29 million acres and killed over 1 billion animals.

For Covid-19, it has found its fertile ground of such large over populated cities. With a well connected world, large aging population, ignorants along with fake news all have contributed to the formation and rapid spreading of this virus. Other outbreak has happened in previous years, SAR, Zika, Ebola, etc... but none has evolved to be so effective to exploit the current human population.

The effects of an over populated urban cities with much crowded environment resembles of an overgrown and dry forest prone to fire. The well traveled and connected world is like having high wind condition to carry the spread far and wide in its initial period. Wind can't be stopped as people can't all be locked in. There is no rain yet in sight until a miracle vaccine is discovered and mass produced.

The response to each calamity has some interesting common characters. Begin with containment and locking down certain area with trenches. First responders are always on the front line, risking their lives to fight these fierce battles. When containment failed, the government start dumping fire retardant from the sky as the federal reserved just dump cash with unlimited quantitative easing. Soon the Congress will pass its stimulus bill to dump cash on every business and family.

Once this is all over, the forest will renew, the old and weak are all burned out leaving behind fertile ground. It is a cruel and uneven destruction to society. The poor, the old, the small businesses will be hurt the most. While the big business and heirs of the rich will benefits greatly after this ordeal.

Stay safe and hunker down. Let the fire pass, so we can come out of it stronger.
Posted by Jason Huy Lam at 8:54 PM No comments:

As I also have a 15 month old, this image has stricken me hard. Arm still wrap around her dad for that faithful journey. https://www.cnn.com/2019/06/26/politics/mexico-father-daughter-dead-rio-grande-wednesday/index.html. They have risked traveling over a thousand mile and ended up death on US soil.

The crisis at the border has been ignored, pushed, walled away and not addressed for so long. You can't face the problem by shutting people out; making the process more miserable, detaining people in inhuman condition. You need to address it as a developed nation with morals and responsibility.

From a wholistic perspective, the hispanic population has enabled the foundation of the U.S. economy than you would realize. This shadow economy is the bed rock that support the prosperous U.S. consuming economy. The cheap labor, many time undocumented, has allows for cheap services from construction to services. It allows the economy to run as a discounted rate. Without this population to support and carry this unfair workload, everything will be much more expensive. The standard of living we all have today will be less affordable. We will have to live with less and lower our standard.

It is unfair to keep this shadow economy going by not addressing the immigration issue. It is irresponsible to wall people out and ignore the crisis. All system are inter connected. Any blockage to the movement will results in human suffering and long term devastation to the system.
Posted by Jason Huy Lam at 11:54 PM No comments:


These are the following options:

Best case: win court, get most refund, content
Likely: settle prior to court with more money back
Worst case: lose money in court, no content

Posted by Jason Huy Lam at 5:48 PM No comments:

This series of observation was made by a friend who has recored his long journey in seeking cure for his health condition.

I had joint inflammation for over 10 years since his early 20s. At 24, I seeks medical help with a rheumatologist in fairfax. After a period of suspecting gout and trying out allopurinal, There is no significant improvement. Even the Dr, gave up on me, saying "I don't know what's wrong with you". All labotory test came back negative or w/o any significant indicator

I went for the first acupuncture session, with a lot of question in mind. The Dr. dress in a white coat with just a white beater underneath. After performing the acupuncture he left and left the assistant to extract the needle. Without a follow up to conclude the appointment, i felt like i got scammed. On the other hand, he didn't seem to care for my return or to impress me.
I gave it a second visit. After the first, i still have inflammation as usual. Taking his pill 3 times a day. During the second visit, the needle pattern changes. There are needle on my head as well as forehead. Total of 6, two in the ears and necks. About 4 on each arm and legs. I also received cupping. My right side was extremely red. It stayed red for 2 days and fade on the 3rd.
I still experiencing some swelling, knuckle and knee moderate only. Felt a slight heavy headed and slight headache. I also have feeling of heat on my breath and face. I notice my humidity level at the house to be average 50%.
On my third visit, he seem to be more welcoming and excited to see me. I showed me the mior swelling on the knuckle and my heated breath. I inquired about the humidity level, he suggest a dehumidifier but not humidity level recommendation. Dehumidifier is a recent invention, there is no text or research on recommended level from the Chinese Med perspective. So follow recommendation from google he said. The needle pattern was similar to the second visit. I also asked for cupping. This results in lots of red on top part of my back.
Right before the third visit, I had two large pieces of bitter melon with meat and soup. After the 1 hr visit I was starving. Also my head was heavy and body seem fatigue. Especially the back, it felt heated and tired after cupping. The next day i slept long and well. Like my body just recovered from being sick.
On the fourth visit, I only have a minor welling on the tip of my index finger to show. There is some disturbances on the knee but not much. His pattern of needle changed. He started from the arm instead of head. He used slight longer needle and he tapped them in. It is more painful in some spot during insertion. Also two more needles in the middle of the ears. During extraction, it felt tighter, the needle was held on by the skin tighter, like there is a magnetic pull on the needle. I asked the assistant how deep. She described it as about 2-3 mm deep. Before probably 1-2 mm deep.
I still feel heavy headed and tired after the visit. I will awaited to see for any more swelling or pain in the next week. So far, my symptoms seem to subsided and much more milder.


To be continue
Posted by Jason Huy Lam at 5:25 PM No comments: